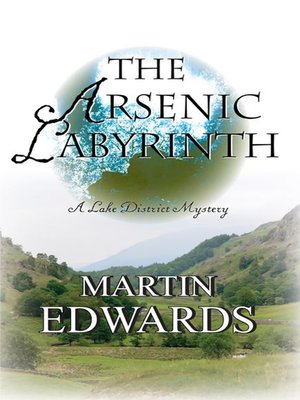 "Fans of this increasingly popular series will be in line for this one, and it should be recommended to readers of such similar British authors as Peter Robinson and Sally Spencer." —Booklist

After ten years, Guy—a drifter with a taste for deception—has returned to Coniston in England's Lake District. Local journalist Tony di Venuto is campaigning to revive interest in the disappearance of Emma Bestwick, and Guy knows what happened to her.

When Guy tips off the newspaperman that Emma will not be coming home, DCI Hannah Scarlett, head of Cumbria's Cold Case Review Team, re-opens the old investigation. Her inquiries take her to the Museum of Myth and Legend and to the remote and eerie Arsenic Labyrinth—a series of stone tunnels used to remove arsenic from tin ore.

Meanwhile, historian Daniel Kind is immersing himself in the work of John Ruskin, whose neighbors created the Arsenic Labyrinth. A shocking discovery made against the stunning backdrop of the Lake District in winter makes it clear to Hannah that there is more than one mystery to solve, and she turns to Daniel for help in untangling the secrets of the past....