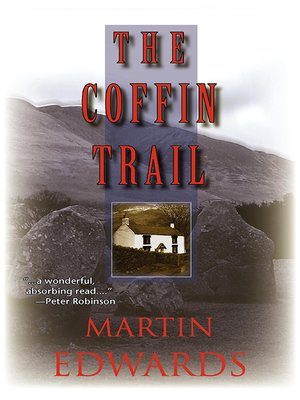 "...a beautifully-evoked sense of the Lake District and an interesting and diverse group of characters. Martin Edwards got plenty of kudos for his Harry Devlin series, and he should get even more for this one. His DCI Hannah Scarlett is a fine creation." —Peter Robinson, New York Times bestselling author

Oxford historian and TV personality Daniel Kind and his new lover, Miranda, both want to escape to a new life. On impulse they buy Tarn Cottage in Brackdale, an idyllic valley in the Lake District that Daniel knew as a boy, a place so remote that the dead had to be carried out over the peaks on pack animals along the ancient Coffin Trail.

Tarn Cottage was once home to Barrie Gilpin, an autistic youth suspected of a savage murder. A young woman visitor to the valley had been found laid out on the Sacrifice Stone, an ancient pagan site up on the fell. Barrie fell to his death near the crime scene before he could be questioned. All these years later, Daniel retains his belief in Barrie's innocence and questions his own policeman father's handling of the case. When DCI Hannah Scarlett and her squad launch a cold case review, Brackdale's skeletons begin to rattle.

The wild geography of the Lakes District plays against local literary references, all backdrop to the lives of villagers and outsiders drawn to this beautiful spot—but for what reasons? The Coffin Trail launches a new series by a master British hand.