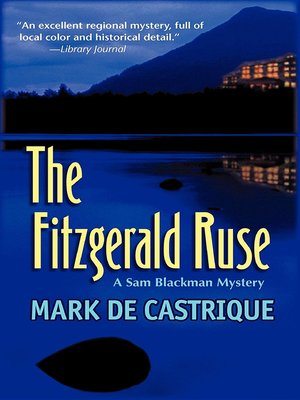 Former Chief Warrant Officer Sam Blackman lost a leg in Iraq and emerged from the V.A. hospital in Asheville, NC, as a bitter civilian without a job or a future. But when he solved a series of local murders, Sam found new meaning for his life. Now he and his partner, Nakayla Robertson, are opening a detective agency. They have high hopes that the thriving mountain region will provide a steady stream of cases.

Their first client, a quirky elderly woman in a retirement community, makes a strange request. She wants Sam to right a wrong she committed more than 70 years ago. Her victim: F. Scott Fitzgerald. Her crime: stealing a manuscript. Sam's task seems simple enough: retrieve the woman's lockbox and deliver the manuscript to Fitzgerald's heirs.

But nothing is simple for Sam. The lockbox is sealed with a swastika, a symbol his client insists predates the Nazis and reflects a scene from The Great Gatsby. Then a security guard is killed and the lockbox disappears. Not only has this investigation triggered a murder, but Sam's final military case has followed him from Iraq and neither he nor anyone close to him is safe....