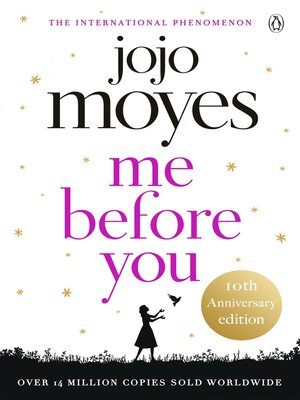 On its 10th anniversary, rediscover the love story that captured 21 million hearts . . . THE NO. 1 BESTSELLING PHENOMENON AND MAJOR FILM ADAPTATION

'One of the most memorable books of the last decade' WOMAN & HOME
'Utterly absorbing and blissfully romantic' DAILY TELEGRAPH
'The only book that ever made me cry' LISA JEWELL
'You simply have to read it' CLOSER
'Magical and heartbreaking' MARIE CLAIRE
'A timeless love story' RED
__________
Will needed Lou as much as she needed him, but will her love be enough to save his life?

Lou Clark knows lots of things. She knows how many footsteps there are between the bus stop and home. She knows she likes working in The Buttered Bun teashop and she knows she might not love her boyfriend Patrick.
What Lou doesn't know is she's about to lose her job or that knowing what's coming is what keeps her sane.
Will Traynor knows his motorcycle accident took away his desire to live. He knows everything feels very small and rather joyless now and he knows exactly how he's going to put a stop to that.
What Will doesn't know is that Lou is about to burst into his world in a riot of colour. And neither of them knows they're going to change the other for all time.
Beautifully romantic, moving and heart-wrenching, Me Before You is the unforgettable love story that defined a decade.
If you fell in love with Lou Clark, find out what she does next in After You and Still Me - out now!
__________
'Lou and Will are a couple who readers will take into their hearts' Independent on Sunday

'Funny, believable and heartbreaking' Woman's Own

'A perceptive and moving tale' Independent
'A triumph' Elle