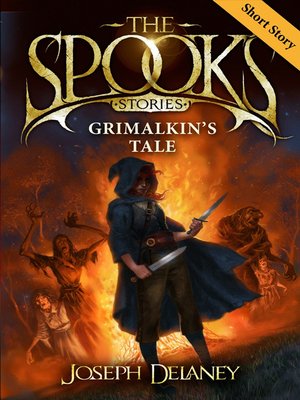 'I fear nobody. But my enemies fear me . . . Without ruthlessness and savagery I would not survive even a week of the life I lead. I am the witch assassin of the Malkin clan.'

Meet Grimalkin, the fearsome witch assassin, and find out how she came to take the role she now holds.

This exclusive digital short story set in the world of Joseph Delaney's best-selling series The Wardstone Chronicles first appeared in the spine-tingling collection The Spook's Stories: Witches. Now available separately for the first time, and including a preview of the first chapter of I Am Grimalkin, this is perfect for existing fans and newcomers alike. The only question is, are you brave enough . . .

'I am Grimalkin and I have already chosen those I will kill.'

Grimalkin has made it her lifetime ambition to destroy the Fiend, avenging the brutal murder of her son.

Having grudgingly joined forces with the Spook and his apprentice, Tom, and assisted them in the binding of the Fiend, she is now on the run. and her mission is deadly.

In order to bind the Fiend's spirit for ever Grimalkin must keep his severed head in her possession. No matter who - or what - comes after it . . .

This latest chilling instalment in the Wardstone Chronicles follows Grimalkin, the terrifying witch assassin, feared wherever she is known.