The Mozarts, Who They Were Volume 2

ebook ∣ A Family On A European Conquest 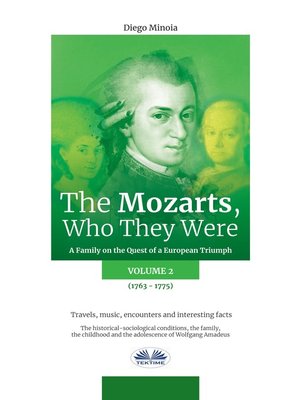 Short description
During a century dominated by absolute monarchy and powerful aristocrats, the Mozart family traversed Europe on the quest for artistic consecration and prestigious promise. Was the ambition of his father, Leopold, combined with the genius of his son, Wolfgang, enough to reach their mission?
The story of their lives, in order to get to know and understand them, follows the sojourns of the adventurous journeys that they carried out. This book takes a penetrating look at the life and experiences of the Mozart family during the 1700s: beyond the myth of Mozart, an in-depth view of their world.
Full description
In this new publication, available in an engaging two-volume series by Diego Minoia, we learn about the life and times of the Mozart family. Everything that there is to discover about these extraordinary characters and the epoch in which they lived is illustrated in this interesting and curious story that narrates approximately thirty years of their lives: travels and encounters, triumphs and disappointments, petty deceit and genius, rebellion and defeat. The story of the Mozart family, told through their own eyes, thanks to a rich collection of letters containing a wealth of information, enriched with detailed study that allows us a complete panoramic view of the circles in which they traveled, between journeys and presentations, intrigue and friendship, compliance to the powerful and desire for autonomy. An overview of a family and of a European continent that helps us understand the Eighteenth Century from a protagonist who rendered it one of the most prolific eras for music.
"The Mozarts: Who They Were" narrates the story of their lives until 1775, following them step by step, getting to know and understand them. Would you like to be their traveling companion? We will begin in Salzburg, where the family was formed and where Wolfgang Amadeus and his sister Maria Anna - known as Nannerl - were born to accompany them in their early travels to Munich and Vienna. We will then follow them in their very long European Grand Tour where the two young Mozart children were to become known as child prodigies, journeying through the principle courts of Germany, the Netherlands, France and England. 5,200 kilometers covered and 80 cities, visited in 1,269 days. No rock or pop star has ever accomplished such a tour!
In Volume I, we will follow Mozart to Munich, then on to Vienna, and finally Paris. Volume II will see his return to Salzburg from London, traveling through France and Switzerland. This is the moment when Leopold Mozart's ambitions become more audacious. It was time for Wolfgang Amadeus to begin his formation in becoming a composer, and there was only one place to do this: Italy. And this is how father and son, alone, without the women of the family, confronted their three journeys to Dante's Bel Paese, where they made friends and found recognition, as well as some less complimentary opinions. We will continue to accompany the Mozart family along the various visits on their tour of Italy where they visited many important cities: Verona, Mantua, Milan, Bologna, Florence, Rome, Naples, Turin, Venice. We will discover through their travels the many interesting facts about how life was lived in the country of Bel Canto - beautiful singing. In the meantime, Amadeus the child, was growing into a mature musician, brought up to perfect his craft, having already composed his first operas, as well as being able to navigate his way through the creation of the sacred and profane vocal and instrumental music. The elderly prince-bishop who had supported the Mozart family passed away and was substituted by Hieronymus Colloredo, whose...