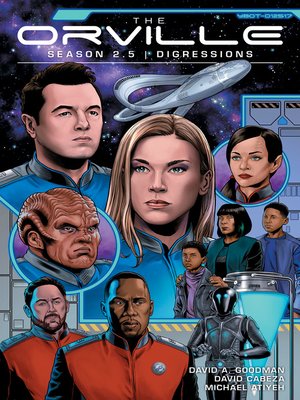 View more libraries...
Join the starship Orville on these new missions set between seasons two and three of Seth MacFarlane’s hit sci-fi TV show! Across space and time, Captain Ed Mercer and his crew explore some of the galaxy’s greatest mysteries in these two thrilling adventures written by Executive Producer David A. Goodman.

In “Digressions,” after being pulled into the future and then sent back with her memory intact, Kelly rejects Ed’s offer of a second date. As a result, she, Ed, Gordon, and Claire never end up serving aboard the Orville. When Kelly realizes this will result in the destruction of Earth, she races to unravel how to bring her would-have-been crewmates together and undo this alternate timeline before the Kaylon burn the galaxy to cinders.

In “Artifacts,” Ed’s old astro-archeology teacher puts the Orville in grave danger when, in pursuit of a legendary fleet of starships from a lost civilization, he leads them into a system so hazardous no ship has ever successfully navigated it. Realizing that the professor hasn’t been entirely forthright, Ed must uncover the truth if the Orville is to survive this perilous endeavor.