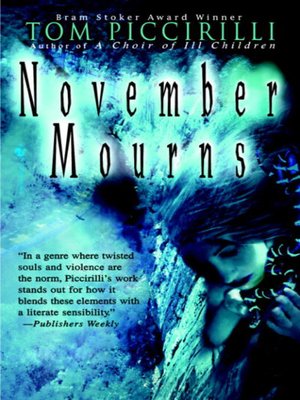 BONUS: This edition contains an excerpt from Tom Piccirilli's The Last Kind Words.

Two years ago Shad Jenkins went to prison for assaulting his
sister's attacker. Now he has returned to the southern mountain town of Moon Run Hollow, only to find that Megan is dead. No one knows how she died--or why she was found on Gospel Trail Road, a dirt path leading up to the gorge high above the Chatalaha River, where victims of yellow fever were once brought to die.

Navigating a world filled with abnormal children and clandestine snake handlers, one that is slowly being poisoned by illegal moonshine, Shad must pierce the townsfolk's superstitions and terrible secrets to find out the truth about his sister's death. But the Blood Dreams he's suffered from since childhood have taken on an eerie urgency, revealing to Shad the nightmarish form of an unseen adversary. Plagued by the wraiths that haunt the hollow, Shad finds himself increasingly unsure of his own sanity as he begins to piece together what may have happened to his sister--and who exactly his enemy is....