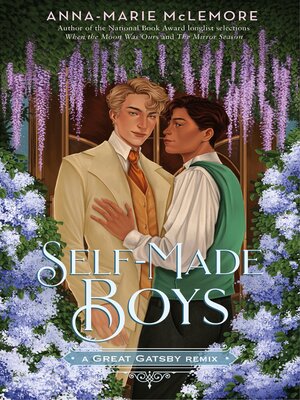 A NATIONAL BOOK AWARD LONGLIST SELECTION
Stonewall Honor recipient and three-time National Book Award Longlist selectee Anna-Marie McLemore weaves an intoxicating tale of glamor and heartache in Self-Made Boys: A Great Gatsby Remix, part of the Remixed Classics series.
New York City, 1922. Nicolás Caraveo, a 17-year-old transgender boy from Wisconsin, has no interest in the city's glamor. Going to New York is all about establishing himself as a young professional, which could set up his future—and his life as a man—and benefit his family.
Nick rents a small house in West Egg from his 18-year-old cousin, Daisy Fabrega, who lives in fashionable East Egg near her wealthy fiancé, Tom—and Nick is shocked to find that his cousin now goes by Daisy Fay, has erased all signs of her Latine heritage, and now passes seamlessly as white.
Nick's neighbor in West Egg is a mysterious young man named Jay Gatsby, whose castle-like mansion is the stage for parties so extravagant that they both dazzle and terrify Nick. At one of these parties, Nick learns that the spectacle is all meant to impress a girl from Jay's past—Daisy. And he learns something else: Jay is also transgender.
As Nick is pulled deeper into the glittery culture of decadence, he spends more time with Jay, aiming to help his new friend reconnect with his lost love. But Nick's feelings grow more complicated when he finds himself falling hard for Jay's openness, idealism, and unfounded faith in the American Dream.
Praise for Self-Made Boys:

"Tenderly written and achingly romantic, Anna-Marie McLemore has crafted a romance for the ages. Their Latinx lens provides more nuance and depth to the classic story. With a breath of fresh life, Self-Made Boys shows us how queer love has flourished in quiet corners across history." —Aiden Thomas, New York Times-bestselling author of Cemetery Boys

The Remixed Classics Series
A Clash of Steel: A Treasure Island Remix by C.B. Lee
So Many Beginnings: A Little Women Remix by Bethany C. Morrow
Travelers Along the Way: A Robin Hood Remix by Aminah Mae Safi
What Souls Are Made Of: A Wuthering Heights Remix by Tasha Suri
Self-Made Boys: A Great Gatsby Remix by Anna-Marie McLemore
My Dear Henry: A Jekyll & Hyde Remix by Kalynn Bayron
Teach the Torches to Burn: A Romeo & Juliet Remix by Caleb Roehrig
Into the Bright Open: A Secret Garden Remix by Cherie Dimaline
Most Ardently: A Pride & Prejudice Remix by Gabe Cole Novoa