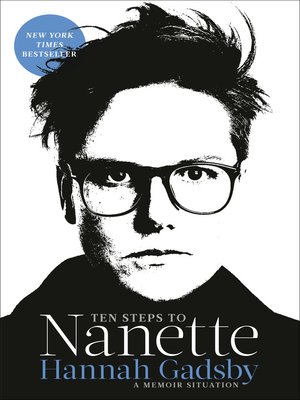 View more libraries...
NEW YORK TIMES BESTSELLER • Multi-award-winning Hannah Gadsby broke comedy with her show Nanette when she declared that she was quitting stand-up. Now she takes us through the defining moments in her life that led to the creation of Nanette and her powerful decision to tell the truth—no matter the cost.
“Hannah is a Promethean force, a revolutionary talent. This hilarious, touching, and sometimes tragic book is all about where her fires were lit.”—Emma Thompson
ONE OF THE BEST BOOKS OF THE YEAR: PopSugar, Vulture
“There is nothing stronger than a broken woman who has rebuilt herself,” Hannah Gadsby declared in her show Nanette, a scorching critique of the way society conducts public debates about marginalized communities. When it premiered on Netflix, it left audiences captivated by her blistering honesty and her singular ability to take them from rolling laughter to devastated silence. Ten Steps to Nanette continues Gadsby’s tradition of confounding expectations and norms, properly introducing us to one of the most explosive, formative voices of our time.
Gadsby grew up as the youngest of five children in an isolated town in Tasmania, where homosexuality was illegal until 1997. She perceived her childhood as safe and “normal,” but as she gained an awareness of her burgeoning queerness, the outside world began to undermine the “vulnerably thin veneer” of her existence. After moving to mainland Australia and receiving a degree in art history, Gadsby found herself adrift, working itinerant jobs and enduring years of isolation punctuated by homophobic and sexual violence. At age twenty-seven, without a home or the ability to imagine her own future, she was urged by a friend to enter a stand-up competition. She won, and so began her career in comedy.
Gadsby became well known for her self-deprecating, autobiographical humor that made her the butt of her own jokes. But in 2015, as Australia debated the legality of same-sex marriage, Gadsby started to question this mode of storytelling, beginning work on a show that would become “the most-talked-about, written-about, shared-about comedy act in years” (The New York Times).
Harrowing and hilarious, Ten Steps to Nanette traces Gadsby’s growth as a queer person, to her ever-evolving relationship with comedy, and her struggle with late-in-life diagnoses of autism and ADHD, finally arriving at the backbone of Nanette: the renouncement of self-deprecation, the rejection of misogyny, and the moral significance of truth-telling.