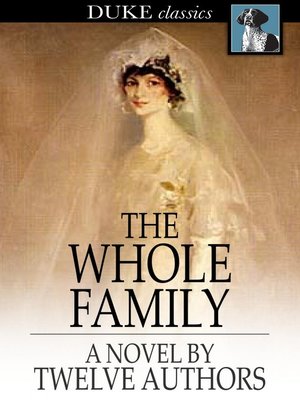 The collaborative efforts of twelve different authors writing a chapter each, The Whole Family is a 1908 novel conceived of by writer William Dean Howells and directed by Elizabeth Jordan, the editor Harper's Bazaar at the time. Howells' wished to explore how an entire family might both affect and be affected by a marriage. The narrative became somewhat of a mirror for the at-times contentious relationships between its various authors. The chapters and their authors are:

The Father by William Dean Howells
The Old-Maid Aunt by Mary E. Wilkins Freeman
The Grandmother by Mary Heaton Vorse
The Daughter-in-Law by Mary Stewart Cutting
The School-Girl by Elizabeth Jordan
The Son-in-Law by John Kendrick Bangs
The Married Son by Henry James
The Married Daughter by Elizabeth Stuart Phelps
The Mother by Edith Wyatt
The School-Boy by Mary Raymond Shipman Andrews
Peggy by Alice Brown
The Friend of the Family by Henry Van Dyke