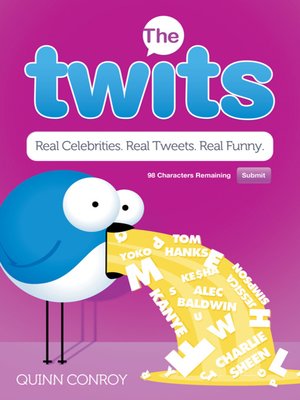 "I prefer to have my affairs over Twitter because I usually can't last more than 140 characters." —Conan O'Brien

They're rich. They're famous. And they're tweeting. And you won't believe what they're saying—the funniest, the dumbest, and the most ridiculous celebrity tweets are all here, in one spot. See silly feuds (Demi Moore versus Kim Kardashian) and nonsense rants (Charlie Sheen) alongside genuinely funny quips (Steve Martin) and bizarre poetry (Yoko Ono).It all makes for an unprecedented look at The Twits—those tweeting celebrities with something funny to say.

"If u could spray yourself with a non typical scent right now, what would it be???" —Tyra Banks

"Mullets decreed illegal in Iran. At last, something we agree on." —Roger Ebert