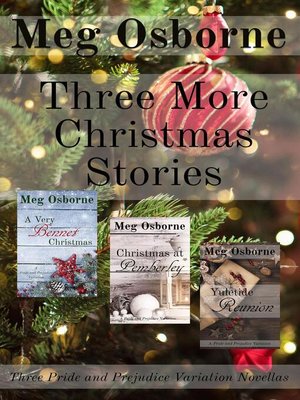 A Very Bennet Christmas
Kept at Netherfield by an un-persuadable Charles Bingley, and surprised by an impromptu visit from his cousin, Colonel Fitzwilliam, Mr. Darcy looks set for a Christmas that is anything but restful. Throw in an uncanny ability to offend the one young lady his heart stubbornly refuses to ignore and the complicated machinations and missteps of those around him and the festive season could prove rather more eventful than anyone anticipated...
Join Jane, Elizabeth, Mary, Kitty and Lydia as they celebrate a very unexpected Christmas season.

Newly-married Elizabeth Darcy is determined that her first Christmas at Pemberley with Mr Darcy will be a happy one, and if that means scheming for her new sister to find happiness then that's what she will do!
Georgiana Darcy is delighted to see her brother so happy and adores her new sister-in-law. She is rather less enamoured with the new curate of their parish, who seems rude, arrogant and unbearably dull upon their first meeting. Forced to interact with him to organise a Christmas concert, however, she begins to glimpse a different side to him and wonders if her first impressions were mistaken...
Mr Daniel Lambert is overworked and overwhelmed in his new role as curate. The Christmas season is busy and he is desperate not to let his parishioners or his family down. Can he learn to trust his new friends the Darcys and step into his new life in Derbyshire or will he let the pressure of expectation keep him aloof and alone?

Absence makes the heart grow fonder as London-bound Fitzwilliam Darcy realises all he left behind him in Hertfordshire.
What providence, then, that Elizabeth Bennet and her whole family have been invited to spend the tail-end of the Christmas season in London with their aunt and uncle.
Will Mr Darcy and Elizabeth work together to reunite their friends; and in so doing listen to their own hearts?