The Arm of the Starfish 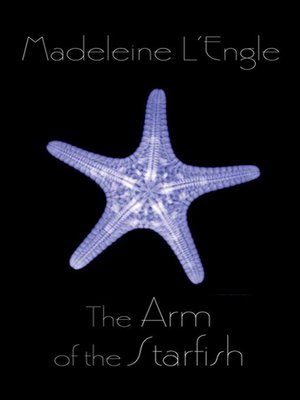 Characters from Madeleine L'Engle's Time Quintet and Austin Family Chronicles cross paths in this story that explore the timeless themes of love, chance, and destiny.
When Adam Eddington, a gifted marine biology student, makes the acquaintance of blond and beautiful Kali Cutter at Kennedy International Airport on his way to Portugal to spend the summer working for the renowned scientist Dr. O'Keefe, he has no idea that this seemingly chance meeting will set into motion a chain of events he will be unable to stop. Caught between Kali's seductive wiles and the trusting adoration of Dr. O'Keefe's daughter, Poly, Adam finds himself enmeshed in a deadly power struggle between two groups of people, only one of which can have right on its side. As the danger escalates, Adam must make a decision that could affect the entire world—which side is he on?
Books by Madeleine L'Engle

A Wrinkle in Time Quintet
A Wrinkle in Time
A Wind in the Door
A Swiftly Tilting Planet
Many Waters
An Acceptable Time
A Wrinkle in Time: The Graphic Novel by Madeleine L'Engle; adapted & illustrated by Hope Larson
Intergalactic P.S. 3 by Madeleine L'Engle; illustrated by Hope Larson: A standalone story set in the world of A Wrinkle in Time.
The Austin Family Chronicles
Meet the Austins (Volume 1)
The Moon by Night (Volume 2)
The Young Unicorns (Volume 3)
A Ring of Endless Light (Volume 4) A Newbery Honor book!
Troubling a Star (Volume 5)
The Polly O'Keefe books
The Arm of the Starfish
Dragons in the Waters
A House Like a Lotus
And Both Were Young
Camilla
The Joys of Love