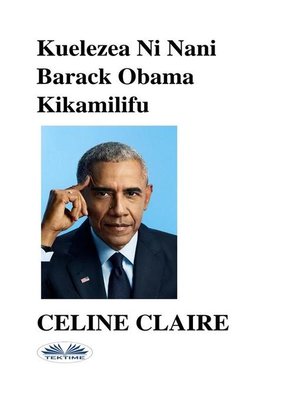 View more libraries...
The e-book is a biography of Obama's life as a child and his works before, during, and after being the 44th president of the USA.
Barack Hussein Obama was born on 4th August 1961 in Honolulu, Hawaii. He is an American politician and attorney who served as the 44th president for two terms from 2009 to 2017. He is the son of parents from Kenya and Kansas. Barack Obama's father, Barack Obama Senior., was born of Luo ethnicity in Nyanza Province, Kenya.Obama's dad grew up herding goats in Africa. Eventually, he received a scholarship that allowed him to leave Kenya and follow his dreams of going to college in Hawaii. During World War II, Obama's mum, Ann Dunham, was born on an Army base in Wichita, Kansas.As he studied at the University of Hawaii at Manoa, Obama's dad met fellow student Ann Dunham. The two got married on 2nd February 1961, and Obama Junior was born six months later. Obama Senior left soon after Obama Junior's birth, and the couple divorced two years later. In 1965, Ann Dunham was re-married to Lolo Soetoro, an Indonesian student from the University of Hawaii.Twelve months later, the new family transferred to Jakarta, Indonesia, where Obama Junior's half-sister, Maya Soetoro Ng, was born in 1970. A series of incidents in Indonesia left Ann Dunham uncertain of Obama Junior's safety and education. So, when he was 10, Obama Junior was sent back to Hawaii to live with his maternal grandparents. Ann Dunham and Obama Junior's step-sister, Maya Soetoro Ng, later joined them.Barack Obama Junior Growing UpAs a child, Barack Obama Junior did not have a relationship with his father. While Obama Junior was still an infant, his father relocated to Massachusetts to attend Harvard University and pursue a Ph.D. Obama Junior's parents officially separated after some time and eventually divorced in March 1964, when Obama Junior was two years old. After a while, Obama Senior returned to Kenya.Barack Obama struggled with his dad's absence during his childhood, who he saw just once more after his parents had divorced. This was when Obama Senior visited Hawaii for a short while in 1971."[My father] had left paradise, and nothing that my mother or grandparents told me could obviate that single, unassailable fact," Obama Junior later reflected. "They couldn't describe what it might have been like had he stayed."While living with his grandparents, Obama Junior enrolled in the esteemed Punahou Academy. He excelled in basketball and graduated with academic honors in 1979. Since he was among the only three Black learners at the school, Obama Junior became conscious of racism and what it truly meant to be an African American.Obama Junior later described how he struggled to reconcile social perceptions of his multiracial heritage with his sense of self: "I noticed that there was nobody like me in the Sears, Roebuck Christmas catalog....and that Santa was a white man.Obama Junior wrote: "I went into the bathroom and stood in front of the mirror with all my senses and limbs seemingly intact, looking as I had always looked, and wondered if something was wrong with me."
PUBLISHER: TEKTIME