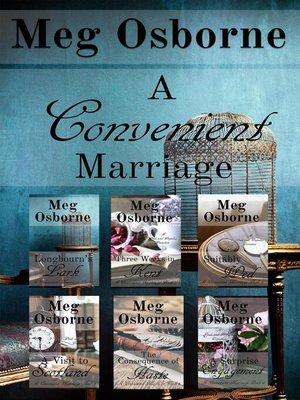 All Six Books in A Convenient Marriage, A Pride and Prejudice Variation Series.

Mary Bennet is used to being the overlooked Bennet sister, but when Colonel Fitzwilliam accidentally enters her life, everything changes.
As cousin to Mr Darcy, Colonel Fitzwilliam knows what it's like to feel invisible. His experiences at war have left him with one goal in mind: to marry, set up home and live in peace. When he witnesses the interaction between his cousin and Mary's sister, Elizabeth, he is determined his own happiness will not be the only end in mind.

If her sister can marry well, and she can avoid Mr Collins, that is all the happiness Elizabeth Bennet can ask for. The first seems certain, with Mary and Colonel Fitzwilliam's wedding on the horizon. Alas, her own future is not yet close to settled, and she must endure three weeks in the company of Lady Catherine de Bourgh, who takes an immediate dislike to the elder of the two Bennet sisters.
Fitzwilliam Darcy is happy to accompany his cousin's party to Rosings, although he tires of his aunt's scheming within hours. He determines on a solution that might offer both he and Elizabeth an escape from the machinations of their families, but can he convince her of its wisdom?

Mr Darcy and Elizabeth Bennet have decided to marry for the most pragmatic of reasons: so that they might each avoid being forced into less amiable matches. Darcy has succeeded in utterly alienating Lady Catherine de Bourgh. His cousins rally to his defence, but the marriage is beset by challenge, and once it becomes apparent that at least one party feels rather more strongly than they admitted, the practicality of the match is called into question.
Lizzy's happy future with Mr Darcy is blighted only by the realisation that her sister, Jane, is miserable. Mr Bingley has suddenly departed Hertfordshire for London, and the match that seemed the most natural is all but abandoned.

A Visit to Scotland

News that his cousin, Anne de Bourgh, has eloped to Scotland puts Mr Darcy in hot pursuit, leaving behind his wife in London and determined, at last, to confront George Wickham for his selfish actions.
Elizabeth blames herself for what has happened and feels sure her husband blames her too. With Colonel Fitzwilliam too ill to escort her she is desperately considering following her husband northwards alone, until she crosses paths with Mr and Miss Bingley who will not be prevented from accompanying her.

The Consequence of Haste

Fitzwilliam Darcy is willing to accommodate the couple at Pemberley for Anne's sake if not for her husband's, for he puts little faith in Wickham's promised intentions to change.
With Georgiana temporarily displaced by the new arrivals, Elizabeth embarks on the running of Pemberley whilst keeping her new family together. How will the new Mr and Mrs Darcy fare in trying to do what is best for their family and friends, as well as preserving their own happiness?

Jane Bennet has been swept up in a courtship nobody expected with a new arrival to Hertfordshire. Elizabeth Darcy can do nothing but witness this surprising turn of events from a distance, and quiz her other sisters for information.
Fitzwilliam Darcy is determined to support Charles Bingley through his perceived disappointment, but when his friend's spirits lift in a growing friendship with Georgiana, will Darcy encourage the connection or seek to prevent it?