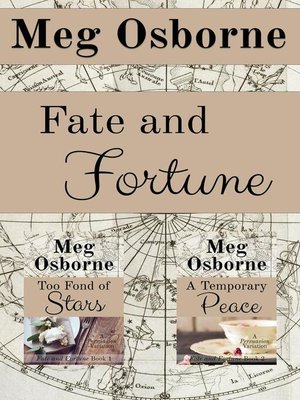 Both Books in the Fate and Fortune Series ~ A Persuasion Variation

Too Fond of Stars

When Anne Elliot removes directly to Bath with her family to satisfy Sir Walter's need to retrench but desire for society, she does so reluctantly. She intends to make the best of her situation, finding friends and occupations enough in the town to keep her busy and useful and leaving her little time to dwell on the couple who have taken on tenancy of Kellynch Hall, or the gentleman from her own past who must likely make his home there with them before too long.
Captain Frederick Wentworth cannot bear the thought of returning to Somerset, let alone to Anne Elliot's former home, for he has not forgotten her nor the heartbreak she caused him by ending their engagement eight years previously. He instead stays on in Bath, where he might be safe from such remembrance – until Anne herself crosses his path.
Unexpectedly reunited by this twist of fate, can Captain Wentworth and Anne Elliot resolve their past misunderstanding and rediscover the love they once shared, or will Anne's family and Frederick's pride again prevent them from finding happiness?

Reunited after many years apart, Captain Frederick Wentworth and Anne Elliot are determined nothing will stop them marrying and embarking on their future together. Eager to escape Bath, and the members of Anne's family who are less than thrilled about the match, they both return to Somerset, where Frederick can lodge with his sister, and Anne with hers, while they plan their wedding.
With new friends offering support and after the surprise arrival in the countryside of another émigré or two from Bath, will all be plain sailing as Anne and Frederick set forth on this next chapter of their lives together?