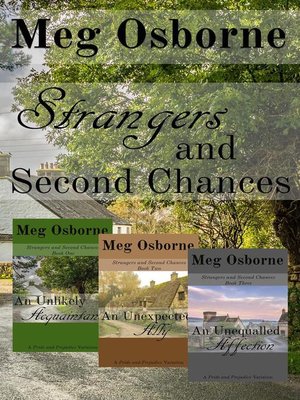 All three books in the Strangers and Second Chances series - a Pride and Prejudice variation.

Poised to take control of the Meryton Barracks, Colonel Richard Fitzwilliam anticipates exchanging a lonely Christmas for an even lonelier year, made worse by his cousin's sudden and surprising exodus from Hertfordshire. He could never dream that his new post would bring the possibility of new romance when he crosses paths with an equally lonely Jane Bennet.
Saddened by her sister's apparent abandonment and determined to secure her happiness in some way, shape or form, when Elizabeth Bennet senses a spark of interest between Jane and the family's newest friend she sets herself the task of matchmaking - certain of success now that Mr Darcy is not present to undermine her efforts at every turn.
Kept in London out of loyalty to his friends and his sister, Fitzwilliam Darcy is only too surprised to stumble across Mary Bennet and even more so by the immediate and fervent friendship that springs up between her and Georgiana. Through Mary he learns more about the people he left behind in Hertfordshire, and his only possible course of action soon becomes clear: to reunite Charles with Jane Bennet and confront his own feelings for another of the Bennet sisters.
But Darcy hasn't counted on the influence of an old adversary, or that his own perceived interference – again! – in the lives of others might not be welcomed by one Elizabeth Bennet.

Colonel Fitzwilliam is only too pleased to share the good news of his engagement with his cousin until a surprising source suggests that the true reason for Mr Darcy's sudden return to Hertfordshire might be to stop, rather than celebrate, the match.
Caught between the interests of his cousin and his friend, Mr Darcy seeks assistance from a reluctant Elizabeth Bennet and finds himself invested in more than one couple's future happiness.
Jane Bennet must choose between Colonel Fitzwilliam and Charles Bingley - but in so doing, will she make a husband of one and an enemy of another?

Devastated by his cousin's betrayal and watching all his hopes of future happiness slip away, Colonel Fitzwilliam calls on assistance from surprising quarters, but involving George Wickham in anything is a recipe for disaster.
Fitzwilliam Darcy tries to stop a duel and find some solution to a problem he helped cause, grateful that he does not have to proceed alone. He has at last acknowledged his love for Elizabeth Bennet and with her by his side, he feels he can achieve anything, even the impossible task of making peace between his cousin and Charles Bingley.
In a fit of confusion and grief, Jane calls off her engagement and refuses to see either gentleman again – but at the very moment her sister's heart is breaking Elizabeth Bennet's is coming to life. She is forced to keep her affection for Mr Darcy a secret, though, when his part in Jane's unhappiness becomes known. Lizzy's loyalty is torn between her family and the man she loves...


The full series in one volume