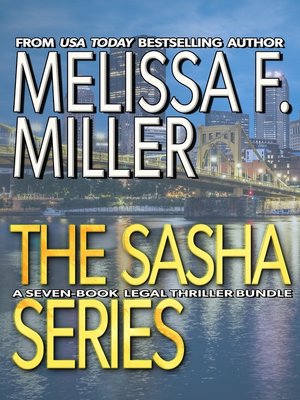 Irreparable Harm: After eight long years, attorney Sasha McCandless is about to make partner. When her client's plane slams into the side of a mountain, killing everyone aboard, Sasha gears up to defend the inevitable civil lawsuits. She soon realizes the crash was no accident and joins forces with a federal air marshal; they race to prevent another airline disaster. When people close to the matter start dying, Sasha must rely on both her legal skills and her Krav Maga training to stop a madman before he kills her.

Inadvertent Disclosure: Sasha's focused on building her solo law practice and tending her budding relationship with federal air marshal Leo Connelly. When she arrives in rural Clear Brook County to argue a discovery motion, she finds a town bitterly divided over the issue of hydrofracking the Marcellus Shale. Outsiders from the oil and gas industry and environmental activists threaten to rip apart the community's fabric. When the town's only judge is murdered, Sasha can't just walk away. She works to find the killer and save the town before it fractures beyond repair.

Irretrievably Broken: The law firm of Prescott & Talbott is reeling from the murder of partner Ellen Mortenson — purportedly at the hands of her husband — when a second partner is murdered, her husband also accused. Sasha soon finds herself representing both of the so-called Lady Lawyer Killers. The long hours jeopardize her relationship with Leo when he needs her most. That's the least of her troubles, though, because the real killer is waging a vendetta for a case gone wrong. And there's one more lawyer on his list.

Indispensable Party: Sasha and Leo put aside their relationship problems to save the world. Together, they race to stop a doomsday prepper from releasing a deadly virus and causing a global pandemic.

Lovers and Madmen: Sasha's plans for a romantic Valentine's Day with Leo are threatened by her cooking skills, a homeless kitten, and a former client with a violent streak.

Improper Influence: Healthy young women are dying, and forensic pathologist Bodhi King turns to Sasha and Leo for help. They discover a long and dirty trail, leading to political influence peddlers, backroom deals, and the biggest law firm in town.

A Marriage of True Minds: Sasha and Leo gather their closest friends and family at a remote eco-resort in Nicaragua to attend their New Year's Eve wedding on the beach. It's romantic. It's breathtaking. It's perfect. Until a murderous enemy from the past arranges for armed banditos to storm the resort and take the bride and groom hostage. Till death do us part may come all too soon, unless Sasha, Leo, and their guests can outwit the mercenaries and reclaim control of the festivities.