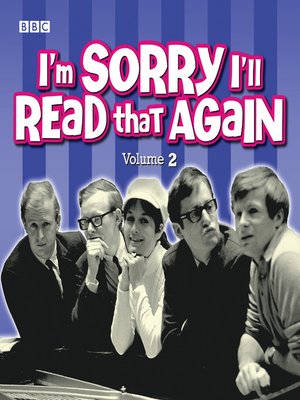 An extravageanza specially written for the wireless by several persons, featuring a number of performers' was how an early edition of I'm Sorry I'll Read That Again described itself, and how nobly the programme lived up to that demanding ideal!

All the artists used to turn up more or less regularly, except when John Otto Cleese had prior ranting commitments elsewhere, and it was truly inspiring to watch them fall to and stuff that gibbon. Despite Radio Prune's pioneering work in employing a woman, a small furry idiot and a future Managing Director of BBC Radio, nobody in the entire history of the show was ever awarded the O.B.E...By the way, this second helping of I'm Sorry I'll Read That Again includes the very first episode of the pilot series and the special 25th anniversary episode.