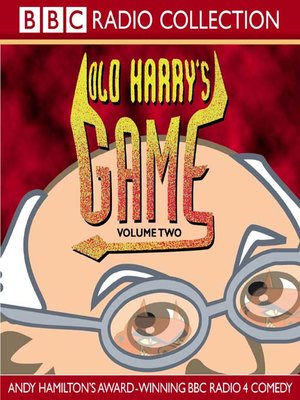 Six more episodes of Andy Hamilton’s fiendishly funny and award-winning BBC Radio 4 comedy. James Grout, Jimmy Mulville, Robert Duncan and Andy Hamilton star in six episodes from the third and fourth series of Old Harry’s Game, the comedy series set in Hell. Satan may rule the roost, but he’s beset by the poor unfortunates condemned to sit out Eternity with him.

Amongst them are the Professor, who is convinced that societies evolve and mature until Satan introduces him to Bill Clinton. There’s also Scumspawn, who here finds himself trying to deal with a lager lout, and a new arrival in the form of a Health and Safety Officer – who soon announces that the lighting in Hell is inadequate.

As for Satan himself, in this batch of episodes he is concerned about his image on Earth, persuaded to remake Casablanca (with Bogart, Bergman and a mutant alien), and determined to prove that the English are the worst nation on Earth. He also takes offence to W.B. Yeats’ verse description of him – and so pays a visit to the underworld’s own Poets’ Corner.

A fiery furnace of brilliant one-liners and biting satire, Old Harry’s Game is the insider’s guide to Hell.