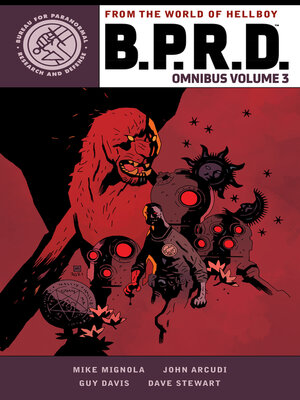 View more libraries...
Join Hellboy creator Mike Mignola and a slew of talented writers and artists as they bring you the third volume in a series of omnibuses that collect the main B.P.R.D. storyline.
In 2001, Hellboy quit the B.P.R.D., leaving its roster of special agents to defend the world from any occult threats, and the growing menace of the frog army. Now their adventures are collected in one continuous saga, following the exploits of Abe Sapien, Liz Sherman, Roger the Homunculus, Johann Kraus, Kate Corrigan, Ashley Strode, and many more from the war on frogs through the end of Ragna Rok.

In this volume, follow the Bureau’s catastrophic encounter with the monster-god Katha-Hem, Kate heads to France with hopes of bringing Roger back to life, and Captain Daimio reveals the truth about his death in the jungles of Bolivia. Abe meets a secret society of Victorian cyborgs with ties to his origins as the frog apocalypse heats up, and Liz’s visions of the end of the world grow increasingly dire!