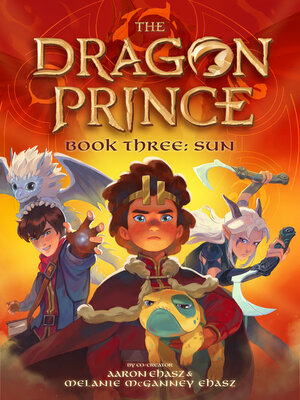 This third canon novel from The Dragon Prince co-creator Aaron Ehasz expands on the thrilling action and adventure of Season 3 of the Emmy-winning Netflix fantasy TV show.

Ezran knew he would one day be king of Katolis, but he never imagined it would be before his tenth birthday. He tries to do what his heart tells him is right, but the neighboring kingdoms — and his father's ex-best friend, the evil High Mage, Viren—threaten to go to war with the magical land of Xadia if Ezran doesn't act soon.

Meanwhile, Rayla and Callum finally enter Xadia on their dangerous quest to bring the Dragon Prince, Zym, back to his mother. Callum can hardly contain his excitement at the magical wonders around him, but Rayla returns to her childhood home and doesn't receive the warm welcome she anticipated.

As Viren grows in power, Ezran, Rayla, and Callum must make a terrible choice: Face Viren's vicious army or go on the run with Zym. The key may lie in a secret from the past, but their decision will affect the future — not only theirs, but that of the world as they know it.

Written by Aaron Ehasz (co-creator of The Dragon Prince and head writer of Avatar: The Last Airbender) and Melanie McGanney Ehasz, this third canon novel based on the Emmy-winning Netflix original series finally gives fans the full story.