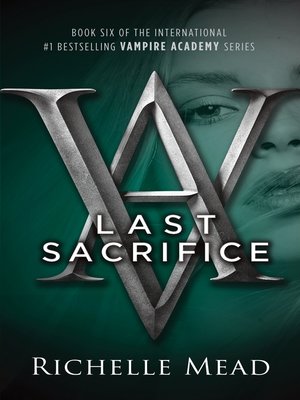 View more libraries...
The international number 1 bestselling Vampire Academy series by Richelle Mead is now a major motion picture.?
Read it before it hits cinemas in 2014!
IT ALL COMES DOWN TO NOW.
Murder. Love. Jealousy. And the ultimate sacrifice.
Join Rose, Dimitri, Adrian, and Lissa in Last Sacrifice, the epic, unforgettable finale to Richelle Mead's international number 1 bestselling Vampire Academy series.
Rose Hathaway has always played by her own rules.? She broke the law when she ran away from St. Vladimir's Academy with her best friend and last surviving Dragomir princess, Lissa.? She broke the law when she fell in love with her gorgeous, off-limits instructor, Dimitri.? And she dared to defy Queen Tatiana, leader of the Moroi world, risking her life and reputation to protect generations of dhampir guardian to come.
Now the law has finally caught up with Rose - for a crime she didn't even commit.? She's in prison for the highest offense imaginable: the assassination of a monarch.? She'll need help from both Dimitri and Adrian to find the one living person who can stall her execution and force the Moroi elite to acknowledge a shocking new candidate for the royal throne: Vasilisa Dragomir.
But the clock on Rose's life is running out.? Rose knows in her heart the world of the dead wants her back . . . and this she is truly out of second chances.? The big question is, when your whole life is about saving others, who will save you?
Love and Loyalty Run Deeper Than Blood
penguinteenaustralia.com