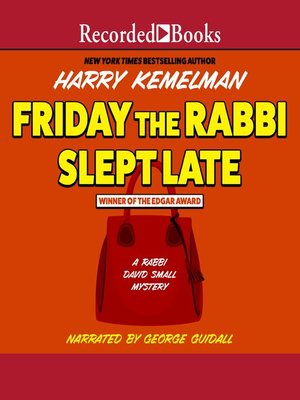 Young and unassuming Rabbi David Small sorts through puzzling pieces of mysteries with logic straight from the Talmud. In Friday the Rabbi Slept Late, a shocking discovery on the temple grounds threatens to ruin both the diligent rabbi and the entire Jewish community at Barnard's Crossing. Unaware that his congregation is grumbling about his rumpled appearance and absent-minded manner, Rabbi Small spends long hours poring over scholarly books. But he is forced to face his congregants' discontent when the police discover a young woman's body outside the temple—and her handbag in his car. Suddenly Rabbi Small must study motives and uncover the killer, or lose more than his followers. Best-selling author Harry Kemelman fills his shrewdly plotted mysteries with likeable and cunning characters who could be your next door neighbors. Personally approved for this unabridged recording by the author's estate, veteran narrator George Guidall expertly brings the harried rabbi and his mutinous congregation to life.