The Horse Who Bit a Bushranger 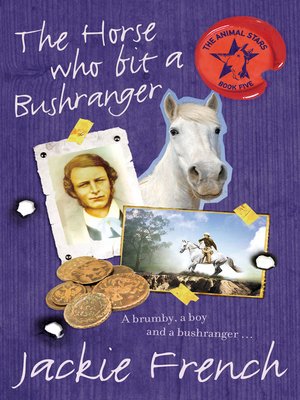 View more libraries...
An exciting new tale of a brumby, a boy and a bushranger in the Animal Stars series.

A story of survival, second chances ... and a dance with danger.

Young Billy Marks is a pickpocket, transported to the penal colony of New South Wales. He reckons he'll become a bushranger - but that's before he's had a chance to see the bush up close. And when he buys the big white brumby stallion, covered with scars but refusing to bend to any man's will, he knows he made the right choice.

Billy's daughter Mattie Jane thinks her father can ride any horse who ever lived ... and so can she! But when tragedy strikes, the Marks clan, including Mattie's beloved horse, Rebel Yell, will need all their courage to keep the family together.

The deeds and disputed stories of Jackie French's own ancestors inspire another novel - a tale of proud horses, trailblazing farmers and their resilient wives, and desperate men forced to break the law to survive.
PRAISE FOR ANIMAL STARS SERIES:

'beautifully written ... a significant addition to the books about Gallipoli' - ReadPlus.com.au