The Poetry of Elizabeth Barrett Browning 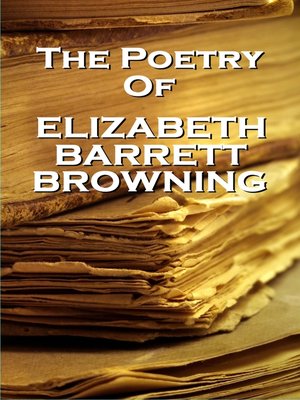 Poetry is a fascinating use of language. With almost a million words at its command it is not surprising that these Isles have produced some of the most beautiful, moving and descriptive verse through the centuries. In this series we look at individual poets who have shaped and influenced their craft and cement their place in our heritage. Elizabeth Barrett Moulton Barrett was born on 6 March 1806, in Coxhoe Hall, County Durham, the eldest of twelve children. Family wealth was derived from sugar plantations manned by slaves in Jamaica and enabling them to also purchase a 500 acre estate in Herefordshire. This wealth allowed her to publish poems from an early age. However by age 20 the family's fortunes were to decline, but never below comfortable, after losing a lawsuit over their plantations . Shortly thereafter Elizabeth became afflicted with an unknown disease and became addicted to morphine. Despite this she continued to write and became increasingly popular both in England and in the United States. Her poems against slavery chronicled her abhorrence of the basis of the family wealth. In 1844 she was introduced to the younger Robert Browning who was a great admirer of her work and began a secret courtship and thence to marriage. To him she wrote and dedicated one of her greatest works; 'Sonnets From The Portuguese' and they went to live in Italy in 1846. Although her health continued to deteriorate her population and influence increased as she continued to write and publish poetry as diverse as love sonnets and political pieces before succumbing to death in 1861. Today she is much loved and highly regarded as one of the greatest of the Victorian poets. The full volume can be purchased from iTunes, Amazon and other digital stores. Among our readers are Richard Mitchley and Ghizela Rowe.