The Poetry of Henry Alford 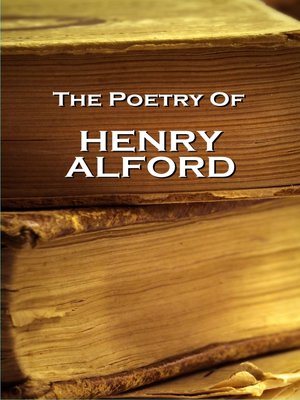 Poetry is a fascinating use of language. With almost a million words at its command it is not surprising that these Isles have produced some of the most beautiful, moving and descriptive verse through the centuries. In this series we look at individual poets who have shaped and influenced their craft and cement their place in our heritage. In this volume we look at the works of the Victorian Poet Henry Alford. Alford was born in London in 1810. Something of a prodigy he had published several Latin odes and a history of the Jews by the time he was 10. Graduating from Cambridge his life was to follow in the family footsteps of being a clergyman and he held the post of Vicar at Wymeswold in Leicestershire, for the next 18 years. Shortly after this he became the Dean of Canterbury. Much of his career highlights are based on his theology and such works as his startling 4 volume edition of the New Testament in Greek. But in this volume we concentrate on his poems. A fine example of a Victorian poet who managed to write several volumes of his own verse, his work is undeniably religious in tone but it has that quality of wonderment of expressing something beyond and apart from themselves.