The Poetry of Rumi 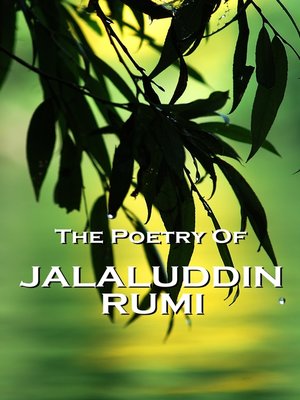 Poetry is a fascinating use of language. With almost a million words at its command it is not surprising that these Isles have produced some of the most beautiful, moving and descriptive verse through the centuries. In this series we look at individual poets who have shaped and influenced their craft and cement their place in our heritage. In this volume we venture to the East. To met a poet who speaks a common language of love and mysticism which continues to convey valuable insights into universal themes in contemporary society. Jaluluddin Rumi (1207-1273) was of Persian heritage, born on the Eastern shores of Persia in modern day Afghanistan and later settled in Konya in Turkey. Consequently he is claimed as the national poet of Iran, Turkey and Afghanistan. More surprisingly and more recently, he is one of the most widely read poets in America. Rumi's early life was dedicated to scholarly studies and only started to wrie poetry after meeting a wandering and wild holy man called Shams. Rumi and Shams spent much time together which had a distinct influence on Rumi. Shams' death, allegedly at the hands of Rumi's son, instilled a profound grief in Rumi and a consequent outpouring of thousands of verses in Persian. Rumi is intrinsically linked with Sufism and one of his other sons founded the Order of the Whirling Dervishes.