The Poetry of Thomas Hardy 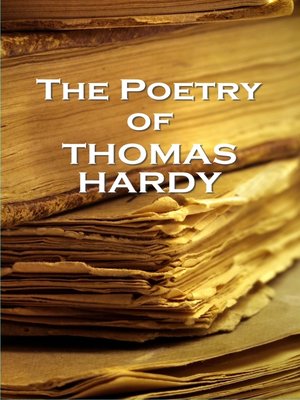 Poetry is a fascinating use of language. With almost a million words at its command it is not surprising that these Isles have produced some of the most beautiful, moving and descriptive verse through the centuries. In this series we look at poets who at first thought summon other crafts to mind. Many giants of Literature originate from the shores of these emerald isles; Shakespeare, Dickens, Chaucer, The Brontës and Austen to which most people would willingly add the name Thomas Hardy. 'Far From The Madding Crowd',' Tess Of The D'Urbervilles', 'The Mayor Of Casterbridge' are but three of his literary masterpieces. But let us go further and add to his canon his Poems. Hardy himself thought he was a poet who wrote novels purely for the money. Indeed his poems were not published until he was in his fifties after his major novels were published and his reputation set. Today his poetry is more rightly regarded in its own right.

Many of the poems are also available as an audiobook from our sister company Portable Poetry. The full volume can be purchased from iTunes, Amazon and other digital stores. Among the readers are James Taylor, Richard Mitchley and Ghizela Rowe.