The Poetry of Edgar Allan Poe 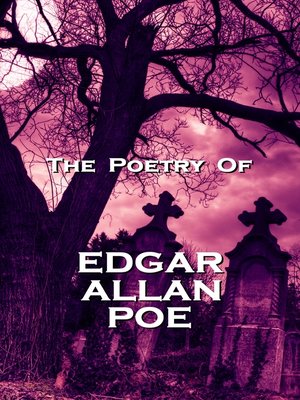 The Poetry Of Edgar Allan Poe. Poetry is a fascinating use of language. With almost a million words at its command it is not surprising that these Isles have produced some of the most beautiful, moving and descriptive verse through the centuries. In this series we look at the American writer Edgar Allan Poe who in the following poems is seen to be a gifted and accomplished poet. Edgar Allan Poe (born Edgar Poe) was born in Boston Massachusetts on January 19th 1809 and was orphaned at an early age. Taken in by the Allan family his education was cut short by lack of money and he went to the military academy, West Point where he failed to become an officer. His early literary works were poetic but he quickly turned to prose. He worked for several magazines and journals until in January 1845 The Raven was published and became an instant classic. Thereafter followed the works for which he is now so rightly famed as a master of the mysterious and macabre. In this volume we bring you some of his poetry, all less well known than his stories, but fascinating none the less. Some are dark and others speak of love. Together they help to round out Edgar Allan Poe the Artist. Poe died at the early age of 40 in 1849 in Baltimore, Maryland. Many of these poems are also available our sister company Portable Poetry.

and can be purchased from iTunes, Amazon and other digital stores. Index Of Poems; The Haunted Place; The Raven; To My Mother; A Dream Within A Dream; Annabel Lee; The Sleeper; A Dream; A Valentine; Dreamland; Dreams; Romance; Sonnet – Silence; Ulalame; Alone; Eldorado; Evening Star; To The River; The Happiest Day; Lenore; Tamerlane; The Bridal Ballad; The Coliseum; Eulalie; Fairy-Land; The Valley Of Unrest; To One In Paradise; Stanzas; Sonnet - To Science; Spirits Of The Dead; Epigram For Wall Street; An Acrostic; An Enigma; Sancta Maria; In Youth I Have Known One; Israfel; The Conqueror Worm; The City In The Sea; The Coliseum; The Forest Reverie; The Divine Right Of Kings; To One Departed.