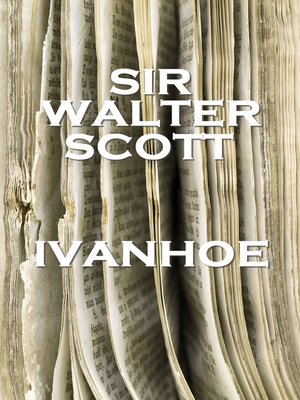 Set in England, Sir Walter Scott's Ivanhoe takes the readers back to the Medieval Ages, about one hundred years after the Norman conquest and the historical battle of Hastings (1066). It tells the story of the tensions and struggles between Norman rulers and a few remaining Saxon noble families. Wilfred of Ivanhoe is a young Saxon noble, he is disinherited by his father for supporting the Norman king, the famous Richard the Lion-Hearted. Ivanhoe decides to join the king in the crusades against the Muslim Saracens and is said to play a heroic role in the battles. On their return to their homeland after their failure to vanquish the Muslims, King Richard is captured and imprisoned by the Austrian ruler. His brother, Prince John, takes the throne and allows the Normans to abuse their power and usurp Saxon lands. Later, Ivanhoe comes back home disguised and engages in a struggle to win his beloved, Rowena, while Prince John strives to prevent his newly-freed brother from returning to his kingdom and throne. After numerous schemes, duels between lovers and bloody incidents, King Richard and Ivanhoe end triumphant and the latter finally marries Rowena.