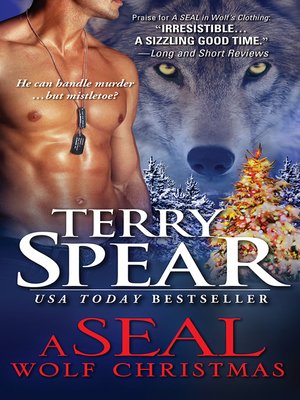 Can an Alpha Wolf Who's Met His Match Survive the Holidays with Her?

Navy SEAL Bjornolf Jorgenson has had tough missions before, but going undercover with feisty gray wolf Anna Johnson could top the list. She drives him crazy—in more ways than one. Now he has to investigate a murder, supervise a wild teenage wolf—and handle Christmas with Anna.

For Anna, the only thing worse than staging the perfect family Christmas is having to do it with Bjornolf posing as her husband. Anna is a serious undercover operative who isn't afraid of a fight, even with a hunky SEAL shifter. With a killer on the loose, Anna just wants to focus on their mission, but the one thing she can't fight is her sizzling chemistry with Bjornolf.

Praise for USA Today bestseller A SEAL in Wolf's Clothing:

"A nonstop, action-packed romance with kick, growls, and sexy attitude."—Long and Short Reviews

"Edgy characters, lots of loving, and lots of action. Just about as good as it gets!"—The Book Binge