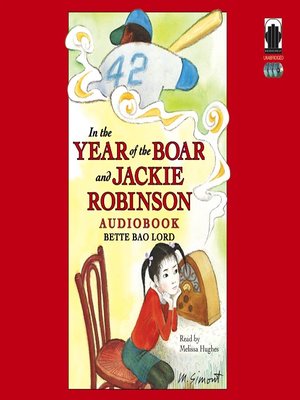 In the Year of the Boar and Jackie Robinson

In 1947, the Year of the Boar, Sixth Cousin, also known as Bandit, leaves China with her parents for a new beginning in America. Proud of the American name that she chose herself, Shirley Temple Wong is optimistic that her new home will be the land of many opportunities. But it's harder than she expected. She doesn't speak English, the kids at school ignore her, and she feels very far from home. But then summer comes, bringing the miracle of baseball. Soon Shirley is the biggest Brooklyn Dodgers fan of all, listening to the radio to hear the triumphs and heartbreaks of the team and her hero, Jackie Robinson. Jackie Robinson proves that in America, the grandson of a slave can make a difference. And for Shirley as well, on the ball field and off, America becomes the land of opportunity.

Bette Bao Lord is the author of Spring Moon, nominated for the American Book Award for First Novel, and Eighth Moon, among other works. Born in Shanghai in 1938, she came to America at the age of eight.

More about Bette Bao Lord
In the Year of the Boar and Jackie Robinson
Copy and paste the code into your website.
New here? Learn how to read digital books for free