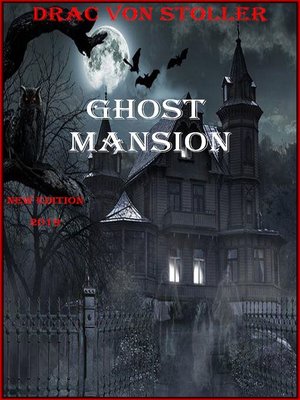 Deep in the country stood a beautiful mansion said to be the most haunted place you'd ever step foot in, but does this place really exist or is it just a legend. Here is where the story begins.

It all happened one stormy night on October 31, 1929. A man by the name of Jasper Davis and his wife Elizabeth were driving down country roads in search of their dream home when his wife said, "Honey slow down, I see a for sale sign in the yard, let's get out and check it out. I feel that this could be what we've both been looking for." Her husband stopped the car, and they got out of the car, and walked up to the front door to see if anyone was home. Mr. Davis knocked on the door, and a man dressed in black opened the door, and said in a low eerie voice, "Won't you come in and see the mansion?" The Davis's entered the mansion and the creaky door slowly closed behind them. The creepy man in black said, "I think you both will like the rest of the mansion, follow me please." The Davis's were over taken by the beautiful antiques that occupied each room. Mrs. Davis said to the man in black, "These antiques must be very expensive." The man in black replied in an eerie voice, "You are so right."

"Well what do you think?" asked the man in black.

The Davis's replied, "We'll take it."

The man in black pulled out what appeared to be the deed to the house, and little did the Davis's know that whoever signs the papers will die. Mr. Davis reached in his pocket for a pen to sign, but had none. The man in black said, "Don't worry I have one."