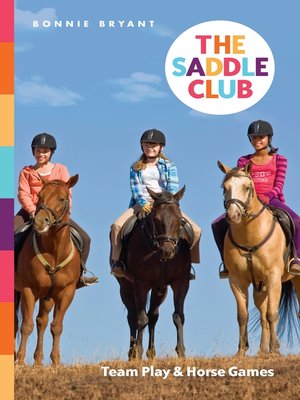 View more libraries...
Three heroines, A love of horses and a strong loyalty to each other.

Stevie's got A Quadruple Dose of Trouble – Can The Saddle Club Girls Help?
A riding team from Italy is coming to Pine Hollow, and Stevie volunteers to entertain them during their visit. It's a job that stuck-up Veronica diAngelo wanted for herself, and now Veronica is determined that Stevie will pay! Suddenly, with the big weekend approaching, Stevie finds out that someone has 'volunteered' her to organise the annual school fair, to run the Children's Hospital Festival, AND to debate for election as class president. Can one person do four things at once?
The Saddle Club Rides to Win!
Stevie is thrilled when she learns that her polocrosse team will be playing against her boyfriend's team. Now she'll finally have a chance to show him what a good rider she is! But when Stevie sprains her ankle and becomes the girls' coach, her competitive spirit begins to threaten their friendship. What will it take to get The Saddle Club team spirit back again? Meanwhile, Carole wants to help her new friend Marie, who was injured in an accident, and knows that horses are the answer.