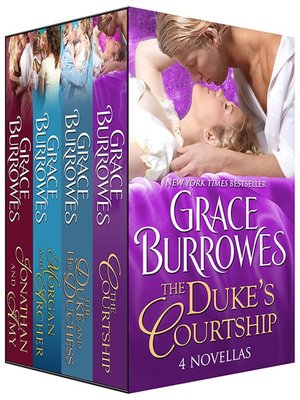 The first novella to be published by New York Times bestselling author Grace Burrowes features the foundation story for her bestselling Windham series. This is the tender story of love tested and won, and how Percy Windham, the dashing and brilliant man who was never supposed to become the Duke of Moreland, wooed Esther Himmelfarb, the amazing lady who became his beloved Duchess.

The Duke and His Duchess

In this second prequel novella to the popular Windham series, Grace Burrowes continues the story of the Duke and Duchess of Moreland through the tumultuous and bittersweet first years of marriage and parenthood. Percival Windham is a second son and cavalry officer when he weds the beautiful Esther Himmelfarb. Percy and Esther must grow into the nobility they've been resisting and stand together, or face the threat of destroying their young family and the beautiful love that started out with such promise...

This sparkling short story ties back to Grace Burrowes' popular Windham series with characters introduced in The Virtuoso and Lady Maggie's Secret Scandal. Archer Portmaine is investigating a plot against the Crown when he meets Morgan James, a young lady who believes her hearing problems make her a poor candidate for marriage, although her disability provides the key to unraveling Archer's mystery—and to capturing his heart.

In Lady Eve's Indiscretion, the Marquis of Deene wanted to wrest custody of his niece Georgina from her wealthy Irish father, widower Jonathan Dolan. Now Jonathan needs Deene's assistance to help him woo Miss Amy Ingraham, Georgina's proper, pretty governess. Jonathan must be clever, determined, and above all else honorable if he's to win not only Amy's hand, but the respect of a society only too willing to judge him harshly.