Jeeves in the Offing 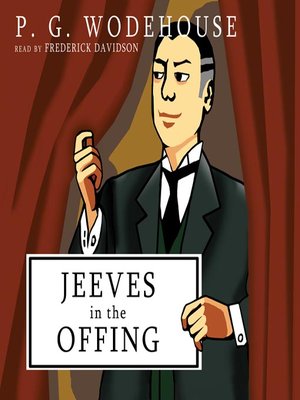 Anyone who involves himself with Roberta Wickham is asking for trouble, so naturally Bertie Wooster finds himself in just that situation when he goes to stay with his Aunt Dahlia at Brinkley Court. So much is obvious. Why celebrated loony-doctor, Sir Roderick Glossop, should be there too, masquerading as a butler, is less clear. As for Bertie's former headmaster, the ghastly Aubrey Upjohn, and the dreadful novelist, Mrs. Homer Cream, with her eccentric son, Wilbert—their presence is entirely perplexing.

And now someone has stolen Uncle Tom's antique silver cow-creamer—again. Suspicions fall on Wilbert Cream, believed to be a wealthy American practical joker and kleptomaniac known as Broadway Willie. But the incident only marks the beginning of Bertie Wooster's problems.

It is only by a stroke of rare—very rare—genius that Bertie Wooster finds a solution. He calls on Jeeves, his incomparable manservant from his annual holiday at Herne Bay, to sort out everybody and everything in his usual inimitable style.