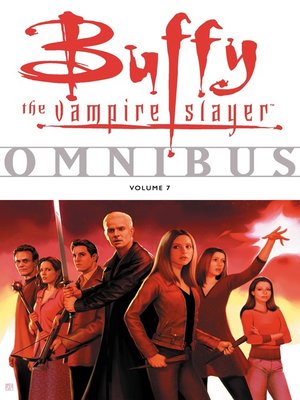 View more libraries...
Buffy's emotions run high after the tragic loss of her mother, but she still fights. She struggles with blood-starved vamps from another dimension and swarms of green demon children with a penchant for nibbling on faces, and, as barriers between alternate realities erode, nightmare versions of friends and long-dead enemies must be dealt with. Then Buffy's own death &mdash; having sacrificed herself for Dawn &mdash; takes a toll on the Scoobies, as they deal with demons and crazed forest creatures in a tale by Amber Benson ("Tara") and Christopher Golden. When Buffy is restored to life, she undertakes a secret mission with Angel, and all the loose ends are tied up with Buffy's trip to hell, bringing an end to an amazing four-year run of Buffy comics.
* The Buffy Omnibus books collect the earliest Buffy comics and are an excellent precursor to Joss Whedon's Buffy the Vampire Slayer Season Eight series.

* "There's plenty of humor and action here. Lots of strange (and strangely fun) violence. And, for Slayer fans, Omnibus is an opportunity to run down memory lane and relive those early, exciting Slayer days." &mdash; comicbookbin.com