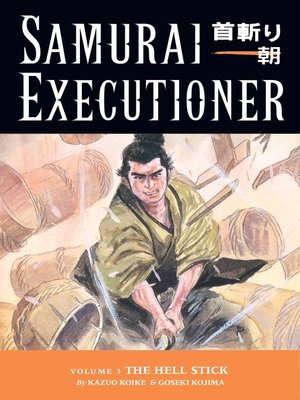 View more libraries...
Readers of Lone Wolf & Cub came to know a samurai of such high honor that he was not only able to perform but enjoyed and, in fact, learned from basic daily tasks. Cutting wood, cooking food. That wasn't something a samurai did back in feudal Japan. These same human elements are apparent in Kubikiri Asa, the main character in Samurai Executioner. He's a man of the people, though his job is to separate many of those same people from their heads.

In this volume, however, we're treated to three fantastic stories of amazing weapons skill, both on the part of Asa and those around him. Witness, for the first time in this series, a duel between two great samurai, in the slow, contemplative tradition. Observe Asa's extremely precise sword stroke. And read a charming story of a young peace officer who practices the use of his specialized weaponry to the point of utilitarian, life-saving perfection. It's more classic samurai stories in our third volume of Samurai Executioner.