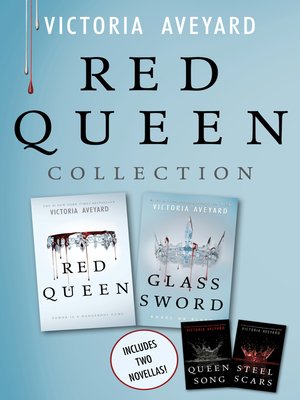 Will her power save her or condemn her? The first two novels in the series, plus two prequel novellas, are collected here, perfect for fans of the series, and those who want to find out what all the hype is about:

Red Queen: USA Today calls Victoria Aveyard's debut novel "a sizzling, imaginative thriller, where romance and revolution collide, where power and justice duel." Mare Barrow's world is divided by blood—those with common, Red blood serve the Silver- blooded elite, who are gifted with superhuman abilities. Mare is a Red, scraping by as a thief, until, by a twist of fate, she discovers an ability all her own. One wrong move can lead to her death, but in the dangerous game she plays, the only certainty is betrayal.

Glass Sword: The hotly anticipated sequel escalates the struggle between the growing rebel army and the blood-segregated world they've always known—and pits Mare against the darkness that has grown in her soul.

Queen Song: In this prequel novella, Queen Coriane, first wife of King Tiberias, keeps a secret diary—how else can she ensure that no one at the palace will use her thoughts against her? Coriane recounts her heady courtship with the crown prince, the birth of a new prince, Cal, and the potentially deadly challenges that lay ahead for her in royal life.

Steel Scars: In this second prequel novella, Captain Farley exchanges coded transmissions with the resistance as she travels the land, recruiting for her first attempt at an attack on the capital. She was raised to be strong, but planting the seeds of rebellion in Norta is a tougher job than expected—until she stumbles upon a connection that may prove to be the key to the entire operation: Mare Barrow.

Plus don't miss Realm Breaker! Irresistibly action-packed and full of lethal surprises, this stunning fantasy series from Victoria Aveyard, #1 New York Times bestselling author of the Red Queen series, begins where hope is lost and asks: When the heroes have fallen, who will take up the sword?