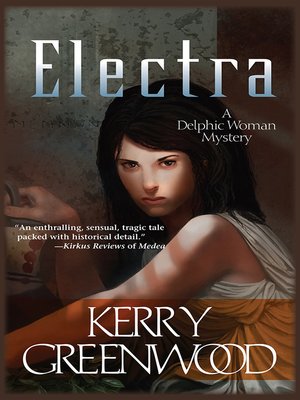 "Greenwood fans will welcome her thoughtful second reinterpretation of a well-known Greek myth. Among Greenwood's other talents, she displays a gift for writing songs of the period." —Publishers Weekly STARRED review

In this, the third and final book in Kerry Greenwood's Delphic Women series, Greenwood takes us into Troy as it struggles to rise from the ashes of the Trojan War. But while others have told the story as a struggle of men, Greenwood gives this mythology a compelling and exciting female viewpoint.

The women of Troy are in terrible transition. Cassandra, the tragic heroine of the second Delphic Woman novel, is King Agamemnon's captive. Queen Clytemnestra has taken a lover who has thrown her own loyalties into question. And then there's Electra, daughter of Clytemnestra and Agamemnon. What compels the young beauty? What secret is she hiding? What are her intentions? Are they dark or justified?

Cast aside everything you think you know about the Electra myth and allow yourself to view this classic story from a different perspective. Greenwood's conclusions will surprise and enrapt you.