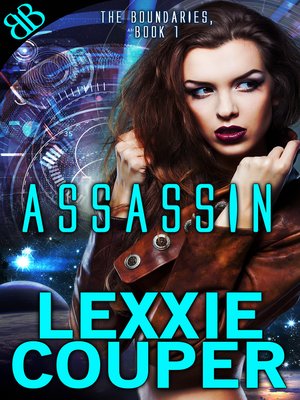 View more libraries...
Experience the boundaries of space, where alien drug lords blight the landscape, sex is a reward and a weapon, and the lines between friend and foe are blurred. Assassin, by award winning sci-fi paranormal author Lexxie Couper, is Book 1 of The Boundaries series, a thrilling ride to distant planets where assassination is the key to winning the war on drugs.
Boundary Guardian Zeric Arctos knows trouble when he sees it—and Raavelian sex-slave Jaienna Ti screams all sorts of trouble. Tracking a nefarious Bliss dealer, Zeric must stay focused on the job, something almost impossible to do with Jaienna close by. To make matters worse, the seductive Raavelian brings out the 'animal' in him—an ancient blood curse he has struggled to control his whole life. The beast now threatens to consume him, and Jaienna's intoxicating kisses make the primitive call so much harder to resist.
Jaienna Ti is out for revenge. And she'll stop at nothing to achieve it. Posing as a sex-slave isn't the worst thing she's done—she is, after all an Intel-Patrol Corp termination agent, albeit a rogue one—but it's definitely one of the more interesting roles she's assumed. And it gets even more interesting when Zeric Arctos 'rescues' her.
Surely being an intergalactic sexual assassin has to come with some perks, right?
*Not intended for readers under the age of 18.
*Previously Published: (2011) 5x5 Publishing | (2006) Changeling Press