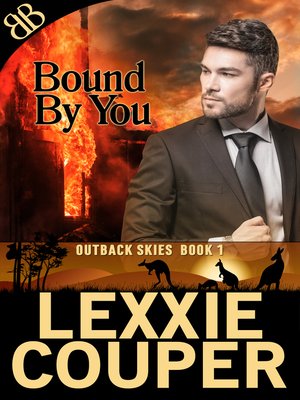 View more libraries...
When the feisty redhead captain of an Australian Outback fire brigade goes toe to toe with a self-confident arson investigator, the flames of desire may consume them both. Bound By You, from award-winning contemporary erotic romance author Lexxie Couper, will set your heart afire as passion explodes in Book 1 of her Outback Skies series.
The intial spark will engulf them...
Desmond Russell. Arson investigator. The best Australia has. Cool, calm, collected and utterly poised. Nothing intimidates him. He knows fire like he knows his own body and soul. Sent to the small Outback town of Wallaby Ridge to investigate the complete destruction by fire of the Australian Deputy Prime Minister's cattle station homestead, he clashes with Jess Montgomery, captain of the local fire brigade, a feisty woman no taller than his chin, with wild red hair and a mouth like a drunken sailor.
Jess has a major dislike of arson investigators, especially ones from the big smoke. Two years ago her brother died in a fire she knew wasn't an accident, but the investigator who arrived from the city—a smug bastard who looked down on the people of Wallaby Ridge even as he reeked of scotch—said it was. She doesn't trust Desmond Russell to investigate his own arse, let alone a fire that destroyed the Deputy PM's Outback homestead. And when she learns Desmond is the son of the drunken investigator who dismissed her claims of arson in her brother's case...well, she's not going to let him waltz in and take over.
The initial spark will engulf them both...but will their hearts survive the inferno?
*Not intended for readers under the age of 18.
*Previously Published: (2016) Book Boutiques, Original title: Combustible, Original series: Heart of Fame | (2015) 5x5 Publishing

Fiction Romance Suspense
Bound by You