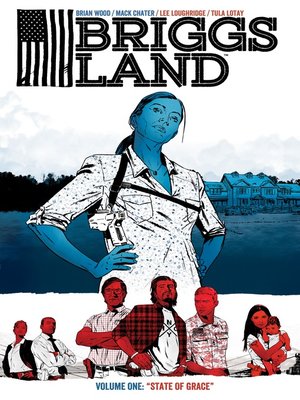 View more libraries...
A critically-acclaimed crime epic set in an American secessionist militia compound mixing politics with complex family issues, from NYT bestselling author of DMZ.
Grace Briggs is the new head of the Briggs family, the largest and most secretive antigovernment secessionist movement in the United States. For over a hundred years it's been a safe harbor for anyone looking to live a simple, quiet life off the grid, but it has since devolved into a hotbed for white extremists, armed militia, and domestic terrorism.
She seeks to take control of the Land—and her family—from the forces of extremism and hate, and return it to its core values. But can she accomplish that before law enforcement finds the evidence it needs to wipe Briggs Land off the map?
From New York Times Bestselling author Brian Wood (DMZ, The Massive,Rebels) comes the latest in his critically-acclaimed line of socio-political graphic novels.  Artist Mack Chater (Smoke/Ashes) illustrates this gritty and electrifying crime saga that speaks to the troubled, polarized world we live in now.
[Briggs Land] "It’s smart, vibrant, original and well drawn. There’s nothing like it out there and it’s the best thing Wood may ever have done (and that’s saying A LOT…the man is a genius)." — Forces of Geek

“Brian Wood is writing a Dangerous Story with Briggs Land, and that’s the kind of story most worth telling.”—John Arcudi

“Given the current political state of the country, this series feels very relevant indeed." - IGN

"BRIGGS LAND IS A UNIQUELY AMERICAN CRIME COMIC YOU NEED TO BE READING.”—NERDIST

“[Briggs Land is] the Sopranos of secession.”—GWW