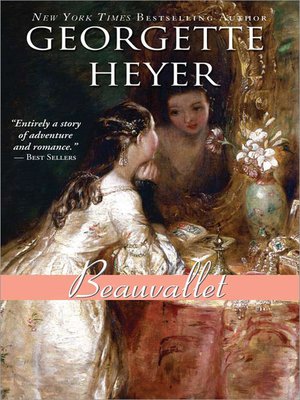 Bestselling author Georgette Heyer, the Queen of Regency Romance, introduces the most daring and dashing hero of all.

"Mad Nicholas" to his friends, "Scourge of Spain" to his enemies, Sir Nicholas Beauvallet is one of Queen Elizabeth's most dashing buccaneers and has never been known to resist a challenge.

When Beauvallet captures the galleon carrying DoÃ±a Dominica de Rada y Sylvan and her father, he vows to return them safely to the shores of Spain. But he has no sooner done so than he proposes a venture more reckless than any of his exploits on the high seas—he will return to Spain, where there's a price on his head, and claim Dominica as his bride...

Praise for Georgette Heyer and Beauvallet:
"Cinematographic with escapes, kidnapping, galloping sword play, and a breathless elopement."—The Times Literary Supplement
"Georgette Heyer was one of the great protagonists of the historical novel in the post-war golden age of the form. Her regency romances are delightful light reading, and her historical novels such as The Spanish Bride and An Infamous Army demonstrate how fiction and history can work together to make a valuable literary form."—Philippa Gregory, New York Times bestselling author