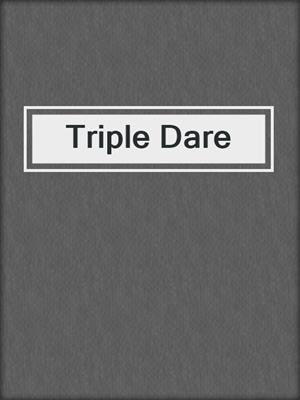 View more libraries...
Two men, one woman, one momentous dare.
Three people, a couple "I dare you", and a snow storm...what could possibly go wrong? Find out in Triple Dare, Book 1 of the Dare series from award winning Australian erotic romance author Lexxie Couper. This is one Red-Hot Winter story!
Serious and determined, Joseph Hudson isn't Australia's businessman of the year for nothing. So now he's asking himself, how did he get lost on the side of a mountain in the Colorado Rockies—in the middle of winter—with night fast approaching? Three simple words. I dare you.
Fear isn't in Rob Thorton's vocabulary. Life is for the taking, and Rob uses both hands. Challenging his best mate to take an impromptu snowboarding trip to the U.S. is just the latest in a lifetime of dares. Besides, he has an ulterior motive for the trip. And a plan...
Park Ranger Anna McCarthy knows what trouble looks like, and it's written all over the two Aussies she first encounters in the ski lodge. Instinct has her following them onto the mountain, and sure enough, they end up needing her winter survival expertise. But not even her skills can stop her body from responding to the sexy muscles she finds beneath their ski suits.
Stuck in a remote cabin until the storm passes, the temperatures rise until all bets are off. And a double dare turns into a triple threat—to their hearts.
This contemporary erotic romance contains a ménage, dating & relationships, two hot Australians in the Colorado rockies, adult themes, and is not intended for readers under the age of 18.
Previously Published: (2011) Samhain Publishing