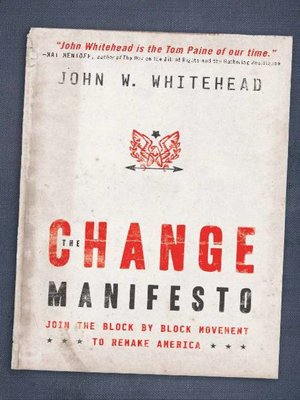 "The Change Manifesto is a street-by-street, town-by-town guide to making an America that works. Our nation has the potential to be an example of freedom and justice to the world and each of us has the ability to have tremendous impact. In this stirring call to arms, John Whitehead tells the stories of the local heroes who stood up to a cynical government, and who are creating thriving communities of change.

We are on the cusp of a new era of progress, but we can't sit back and hope our elected officials will carry us there. We can join the people taking action at the local level, like the residents of a town in Oregon who protested unfair bills by paying in pennies, chickens and the shirts off their back. And we can follow the examples of the national heroes who are fighting for change and demanding accountability from our elected officials at the highest levels. If we refuse to listen to the cynics, we can join these everyday Americans, young and old, and harness our greatest resource: ourselves."