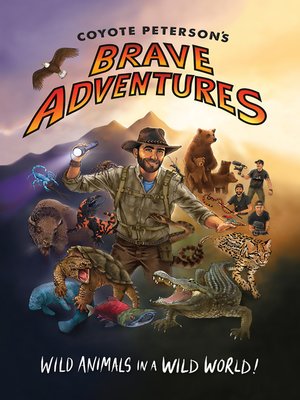 The Emmy-winning host of Brave Wilderness shares his wildest encounters with animals across the world in this illustrated book for young readers.
After catching his first snapping turtle as a kid, Coyote Peterson was fascinated by wild animals. Now he shares that fascination through his YouTube channel, Brave Wilderness, and his Animal Planet series, Coyote Peterson: Brave the Wild. Over the years, he and his camera crew have had some incredible moments with wildlife, both on and off camera.
From the time a giant alligator nearly caught Coyote in its bone crushing jaws, to the time an 800-pound Grizzly Bear helped him teach viewers what NOT to do when facing one of them in the wild, every tale is full of fast paced action and daring adventure. With danger often looming for Coyote, these stories remind readers that animals rule the wild places of this planet, and if we respect them from a safe distance, even the most frightening creatures are more likely to be afraid of us than we are of them.