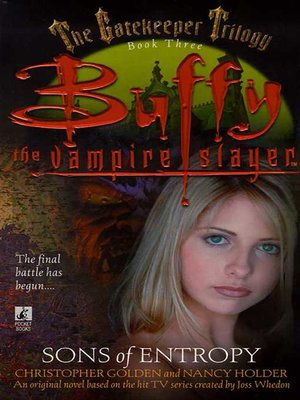 View more libraries...
All Hell is Breaking Loose
Led by the fanatical Il Maestro, the Sons of Entropy are assaulting the supernatural Boston mansion that holds back the realm of monsters, and stealing the life force from the besieged Gatekeeper. In limbo, the Ghost Roads are crumbling, becoming weak and unstable where Hell and the Otherworld have begun seeping in, blurring the passages that lead to the human world. And Xander lies mortally wounded from a failed attempt to free Joyce Summers from the clutches of the zealots who hold her hostage.
With the Gatekeeper rapidly weakening, Buffy sends Willow and Cordelia to escort Xander along the Ghost Roads to the Gatehouse, which may hold his only hope of survival. Meanwhile, she, Giles, and an unlikely band of allies take their fight to the very mouth of Hell itself, desperately hoping to save Joyce and repel the evil spawn before Sunnydale becomes a demonic ground zero. Only then can Buffy safeguard the Gatekeeper's eleven-year-old heir, the only one able to prevent the ultimate destruction of humanity.